How to write inclusive job adverts

It’s well known that diverse teams produce better outcomes – increased productivity, more innovation, better financial returns. But building a diverse team doesn’t happen overnight. It’s a result of inclusive practices and values at every stage of an employee’s lifecycle, starting from the moment they consider you as a potential employer.

An inclusive workforce begins with the words you use in your job adverts. Far too often, job adverts form the first barrier to hire for many people. Whether it’s complicated words, confusing jargon or unconscious gender bias, our language choices stop perfectly qualified candidates from applying.

But what exactly does an inclusive job advert look like? You’ll probably have seen lots of articles about gender bias in job adverts – and that’s a key part of it – but it’s important to remember that inclusivity extends beyond gender.

Research from Acas found that 1 in 7 people in the UK have neurodiverse conditions. Neurodiversity is a word used to describe a range of conditions, like ADHD, Autism and Dyslexia. It was penned by sociologist Judy Singer in the late 90s to challenge views of neurological diversity as ‘defects, disorders or impairments’ and recognise neurological differences as on a par with gender or ethnicity.

So when we talk about inclusivity in job ads, we’re really talking about writing in a way that is accessible and readable for as many people as possible.

Reviewing your adverts: a 3-step process

The question is, how do you know if you’re writing inclusively?

Writing non-biased job adverts can be easier said than done. Bias is often unconscious, making it notoriously difficult to spot. It’s especially tough if you’re recycling old adverts or using outdated corporate comms templates, which tend to inherit all sorts of unwelcome bias and non-inclusive language as they do the rounds.

That’s why we built our Pre-Launch Checklist. It’s a simple way for In House Recruiters and Hiring Managers to review their job adverts and templates for inclusivity (and it’s free to download here).

The Checklist is broken down into 3 edits:

Edit 1 Getting the basics right

Edit 2 Writing for everyone

It’s 3 edits for a reason. When you proofread a document, it’s impossible to remember all the things you’re checking for and the decisions that you’re making. Breaking your review process into 3 steps helps you to more effectively spot non-inclusive language and other errors.

Each Edit focuses on a different aspect of your job advert and is grouped into key themes of gender, readability and tone, with specific advice for your job title and equal opportunities statements.

A good job title is straightforward, concise, searchable and inclusive. And when it comes to job titles, there are a few hard and fast rules to follow to help you achieve this.

Importantly, and I can’t stress this enough, you should be writing job titles that jobseekers understand. Sounds simple, right? But how many times have you seen internal language and business jargon in job titles?

Candidate’s won’t understand what a ‘Level 4 Marketing Manager’ means. Nor will they understand what’s expected of a ‘Marketing Ninja’ or ‘Sales Guru’. Terms like this are ambiguous and unhelpful, but figures of speech and idioms are particularly hard for people on the autistic spectrum to understand. Think ‘designer’ not ‘ideas engineer’.

70% of adverts we analysed contained some level of masculine bias. This ranges from obvious clangers, like ‘Chairman’ and ‘manpower’ to more subtle, coded language, like ‘assertive’ and ‘competitive’.

Now, this is not to say that women can’t be assertive or competitive. Instead, this language reflects unconscious biases and stereotypes that our society has long held about gender and the workplace. Logically, we know these stereotypes are nonsense. But subconsciously, they affect our behaviours – like how we communicate and whether we feel like we belong.

The impact of biased language on job applications was studied in 2011 by Gaucher, Friesen and Kay. They found that gendered language in job ads exists and contributes to gender inequality.

For best results in your job advertising and using the Pre-Launch checklist to guide you, remove all examples of masculine bias and, for best results, increase the feminine coded language.

We recently analysed 8,500 job adverts and found that 1 in 8 job adverts is more difficult to read than Darwin’s “Origin of Species”. Let’s just think about that for a second. Our job adverts are wordier and more complicated than a 500 page, 19th century book on evolutionary biology…

And it gets worse. 60% of the UK workforce has the reading skills expected of a child leaving primary school, but we write job adverts that you literally need a degree to understand.

The impact of such complicated language is even more significant for people with neurodiverse conditions. Large blocks of text are hard for everyone to read – particularly people with autism and dyslexia.

There’s a misconception that long sentences and fancy terminology make you sound professional – frankly, that’s a myth. All it does is stop people reading and understanding your ad.

As you work through the Pre-Launch Checklist, focus on making your advert easy for people to skim read. Keep paragraphs short, use headings and bullet points appropriately and keep your language simple.

Tone and personality in job adverts

When it comes to your brand’s personality, research from LinkedIn states that if the tone of your job post doesn’t match your culture, applicants are 2 – 4 times less likely to apply.

Make sure jobseekers can see themselves in the role. Can they identify with the mission, vision and ethos of your company? Can they visualise their future with you? Is your tone and style consistent with your brand’s personality?

How to get started

Start by reviewing the job advert template that gets reused all the time. You know the one I mean… that pdf or word document lurking in the HR files that gets dredged out every time there’s a new rec.

Review this template against the Pre-Launch Checklist and circulate the updated version with your team and Hiring Managers. Your changes will trickle down through the company, making this a simple way to start making an impact.

However you get started, the important thing is that you start. Be conscious of your language choices and the impact they have; focus on belonging and teamwork when you write your adverts; and show an environment where everyone would want to work.

Keeping inclusion and belonging front-of-mind as you write your job ads will help you shape language that’s appealing and accessible to a diverse group of people. Then, use the Pre-Launch Checklist to proofread your advert. Follow these steps, and you’ll be writing inclusive job adverts every time. 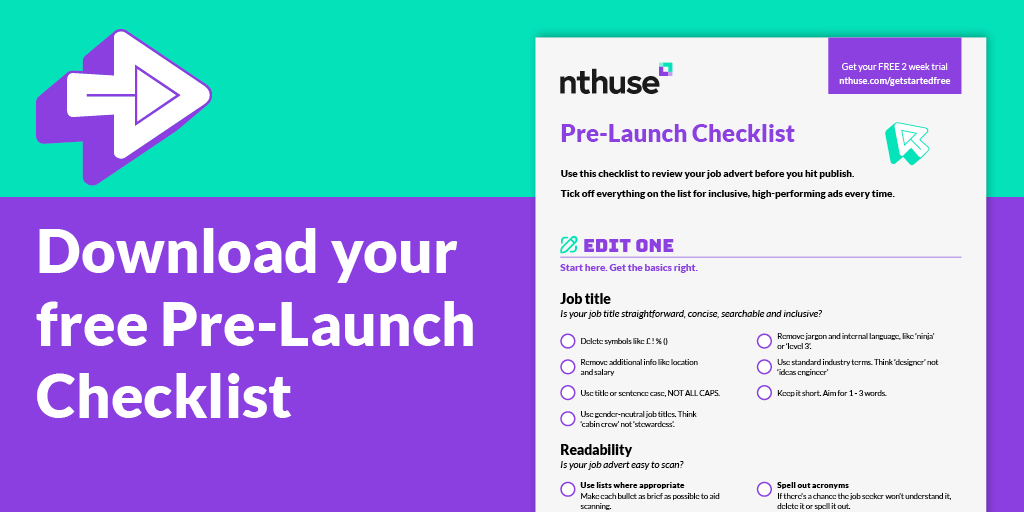